As THECar is now performing very well, we have began experimenting with other setup features that have been popular over the last few years. One such thing is the bladders. What we have found is that cutting the stock bladder so it is basically an O-ring, and building the shocks as emulsion shocks, the car feels more plush, and holds it’s line better in long corners, indicating that it has more grip, it’s slightly more locked in. However, the biggest difference is how it pops off jumps and lands. It pops less, and doesn’t want to ”double-bounce” on landing. It just lands and soaks it up nicely. It’s easier to drive the car specially in situations where you land a jump into a corner and have to immediately accelerate into the next section. The car settles faster and just goes.

If you look at the video above, the step on step off is one area where you notice a difference. The car lands and settles better when jumpin on, which makes jumping off easier, even though you do lose a bit of “pop” on the jump. When jumping off it is also easier to carry speed through the corner and into the next section.

Another area where the emulsion shocks were clearly better, was flat landing at 34 seconds, and maybe most evidently negotiating the following double double and accelerating onto the front straight. Where before you had to be careful, land well, and then accelerate, now it was a lot easier and did not require the same precision.

So for now we are running emulsion. I can see emulsion being worse on very high traction, or when you need more snappy response and “pop” over jumps. Again, both bladders and emulsion works, but emulsion is easier to drive. 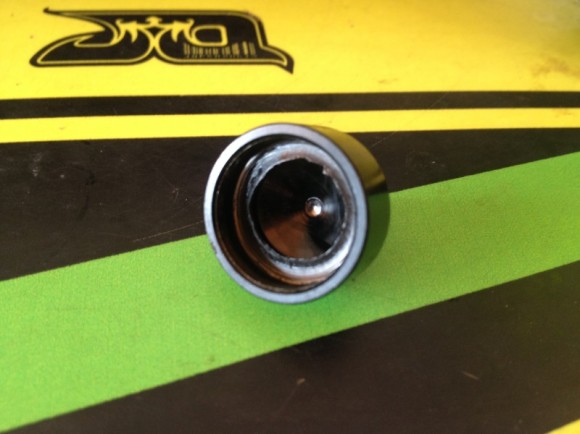 …and just insert it as normal into the cap.

To build the emulsion shocks, you follow the exact same steps as with a regular shock with a bladder. I put a bit of oil in the cap too. I screw the cap on a turn or two, hold the shock at an angle with the bleed hole facing up, push the shaft in so 3mm remains visible, and turn the shock body slowly, letting the excess air and oil out. If you can feel the damping get harder as you move the shock shaft in when you are done, open the cap 3/4 of the way, with the shaft extended, and repeat the process. I build the shocks so they are dead. After working the shock for a few seconds the shaft remains where I leave it with 3mm visible.