What type of racing do you do?

How long have you been racing?

I started when I was a kid, stopped for a while and then started again about 8 years ago.

How would you describe your skill / experience level?

How many Neos have you attended ?

How have you found The Neo generally this year?

The event’s as good as ever. Having been racing in USA it is great to come back to this level of professionalism and event organization. Phil, DXR, the BRCA and all the other staff do an awesome job, but the quality of drivers and competition is great as well.

How have you found spending time with the JQRacing Team?

Is this a serious interview ? (smiling) Its been good fun, everyone is helpful. A small but genuinely passionate team. People seem to be in the team because they genuinely believe in what JQ is trying to achieve. By the way it’s possibly the rudest team I have ever pitted with. It’s good fun. (smiling).

What were your reasons for trying a BLACK Edition?

Two reasons, one I was genuinely tempted to buy a Black Edition but once Lee Martin signed with Infinity and decided to race the HB I did as well. (note : Lee Martin is a friend of David’s so he generally runs the same chassis as Lee. Currently Lee is able to race different chassis as the infinity product does not exist yet). So my reasons for trying the Black Edition are that I had previously consider buying one, my HB nitro chassis arrived too late to get prepared for The Neo and when I saw the JQR Black Edition loaner for Neo advertisement I thought it was a great opportunity.

Solid. Looks strong. Well put together plus some clever ideas like the electrics being easy to install for example. You can tell it is designed by an engineer and racer as there are good solutions to common problems.

The Black Edition immediately felt safe, neutral on the jumps and good on the bumps. JQ suggested more toe in on the rear hubs and it was good throughout day one. However I did not do enough laps due to small engine issues and a few maintenance related teething problems.

This the fourth year I have been eligible for the over 35 final and the first year made it. It is also my best ever overall Neo qualifying. To achieve that with a car with which I had absolutely no previous experience with says a lot about the Black Edtion. (Ed. note David qualified 101st overall) 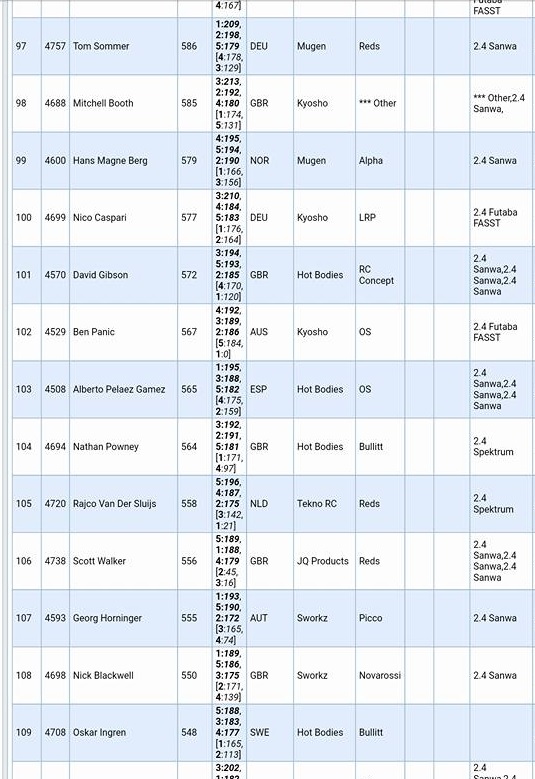 The BE felt good. Even with track rutted the car handled well. I struggled with getting into a driving rhythm though, partly due to engine damage affecting the tune

It has been an awesome race meeting, I really enjoyed it. I qualified well but had a few engines issues in the main, however due to the strong qualifying I may not have bumped anyway. The car was really good, it didn’t miss a beat all weekend

Over all comments and thoughts?

I have run a lot of different cars and this is the first one I have run that I can’t think of a weakness. A very very good car for people to try. Probably what speaks to the truth of that more than anything is I have now asked my local stockist in the US to sell me a BE and Ebuggy so I can keep running the brand as a paying customer! JQ’s design is good and he was helpful throughout neo with setups and parts.

Finally a huge thank you to all of the JQRacing Team, especially JQ and Liam (Team Manager). The car, pitting, help, it was fun, the team supper, awesome weekend. Many thanks.