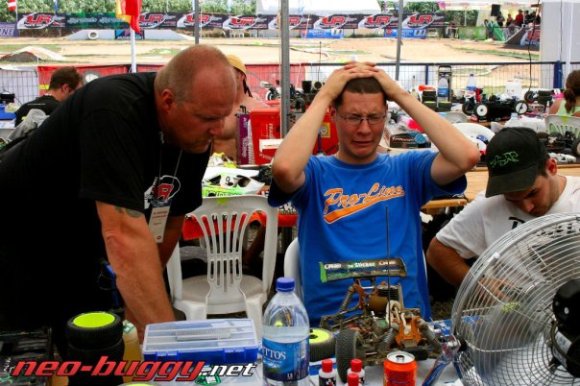 You were the laughing stock of the live rc chat during the race. Watching you literally choke as bad as you did was awesome. Keep up choking at big races it’s so entertaining.

Well, I don’t know what race people were watching, because the one I was in, I didn’t choke.

To understand choking, you need to understand how the brain works, and how we learn, here are a couple of quotes from Michael Gladwell’s post.

“Willingham says that when you are first taught something–say, how to hit a backhand or an overhead forehand–you think it through in a very deliberate, mechanical manner. But as you get better the implicit system takes over: you start to hit a backhand fluidly, without thinking.”

“Under conditions of stress, however, the explicit system sometimes takes over. That’s what it means to choke. When Jana Novotna faltered at Wimbledon, it was because she began thinking about her shots again. She lost her fluidity, her touch.”

So basically, choking means that you start thinking about what it is you are doing, instead of just doing it. Here is a really simple experiment for you. Stand up and walk around. Now stand up and think about every movement and muscle you use to walk and exactly where to put your feet. If you start thinking, you can’t even walk, because it’s supposed to happen automatically.

I have had a tendency to do this right at the end of races, so basically choke, start thinking, and not just doing. At neo I was in the LCQ, and ironically roles were reversed, I caught and passed Savoya from nowhere, with 2 laps to go, then I crashed on the big quad after the burm. At Reedy I was in 2nd in 2wd behind Cavalieri, as good as it’s going to get, and I cased the last simple double. Those mistakes could be classed as choking, because I started thinking, I wasn’t attacking the track, I was being conservative, I was playing it safe, I was “trying to be too butter” like Kirkman would say. Ronnefalk crashed on the last corner at the Worlds, and if he had been really unlucky he could have flamed out on the pipe he landed on. This happens to almost everyone to some extent when they have something “in the bag”.

So why do I think all the haters are wrong about me choking in the B main? Here’s why:

Basically, I was a bit too slow, throughout the race, and at no point did I think that “I got this in the bag”. I knew, as I could see the others catching, that this was going to be a tough race. But as I was out front, I didn’t want to make any mistakes. I went as fast as I could without crashing. First Ogden was coming, then he crashed, then I believe he broke. Then Battle, but he flamed out. Then I saw Savoya and King catching, I had a big lead, but I saw they were catching too fast for comfort. I knew I had to go faster, and actually after the halfway mark, I managed to increase my speed, and I had multiple of my fastest laps right before the last pit stop. After the pit stop I tried to keep up the increased pace but I kept making small mistakes, I regrouped and managed to improve again. I didn’t want to let them catch me, I wanted to pressure them into getting frustrated and crashing. Then I crashed. Up to that point, I hadn’t been marshalled a single time, I had rolled twice early in the race, that’s it. I had an almost perfect race going until that point. Now Savoya was right behind me. The next lap I did the triple the same as I did every other lap I thought, but it launched me nose high, I pushed the breaks but the wind kept it up, and I OJ Simpsoned the jump and crashed. I was so disappointed. I at least wanted to lose with dignity if I was going to lose.

At no point in that sequence did I feel like I choked, I knew I had to go faster to stay in the bump up, and I tried to do that, which lead to a mistake. When you aren’t fast enough, any mistake will be magnified. Truhe crashed more and worse than me, but he was fast enough to still finish 2nd.

I felt like my car was amazing. When I got in the lead I remember going through the centre section and thinking “This is going to be a good year”. What I need is a bit more speed, and confidence in my car and my driving. I think if things keep going as they are now, then this will happen during this year.