I wrote about the podium yesterday, now the next group of finalists and their cars.

A great performance by Adam, his best in years. When Maifield was leading, and Adam was in 2nd, I can’t have been the only one thinking “no way!” in disbelief. I assume Maifields input has helped with setup and confidence, and we can expect Adam to have a bit of a resurgence this year. Adam puts in the work, and the preparation, just add the perfect setup at the race, and confidence, and he will be up there.

On another note, one unfair advantage he had at this race, was the completely stupid money grab legends class. What a joke that is. Adam basically got an extra practice round before each pro qualifier, and a practice main. A huge advantage at this event in my opinion. Before Adams nut huggers start hating me, just think about it this way. If Maifield was the only pro guy in the legends class, and he did that, and then won the race, do you think the rest of the pro guys, like Boots and Cavalieri on the podium would just stay silent? There is no way they would, they would complain about the DOUBLE track time Maifield got. Think about it.

After struggling in qualifying, Tebo pulled it all together for the mains, bumping to the A, and securing a top 5 finish. He managed to get up in the battle at the front for a moment, but mistakes and racing incidents dropped him back to around 7th place for most of the main. The most consistent driver based on the numbers on liverc. It just wasn’t happening for him this time. 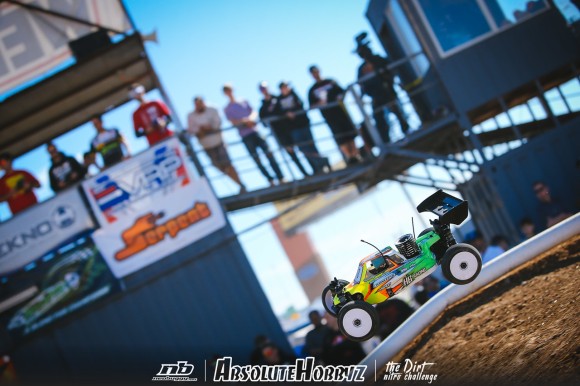 David was really disappointed after the race, after apparently Maifield taking him out early on, knocking him off the track, and then after that having to come into the pits twice to change a tyre. The rubber actually tore off the wheel. He lost around 40 seconds changing tyres, so just based on the times, that would have put him 2nd, so basically in the fight. I did wonder what was going on when he was on track with Maifield, not giving Maifield room and pressuring him. Seems like there is some beef there now! Should spice things up nicely for Silver State.

David was struggling a bit in qualifying, but in the last round they got it all right, and in the main he was also fast. Cody King also looked good, and interestingly his car looked completely different to Davids on track. David’s looks very solid and high on the track, and King’s looked low, soft and plush.

I had picked Spencer as the dark horse of the main, not expecting him to podium, but accepting fully that he could easily do it. For the first half of the main he was up there, then he faded to the back. Apparently he broke somewhere in the main, and the front end was flexing all over the place making his car hard to drive. 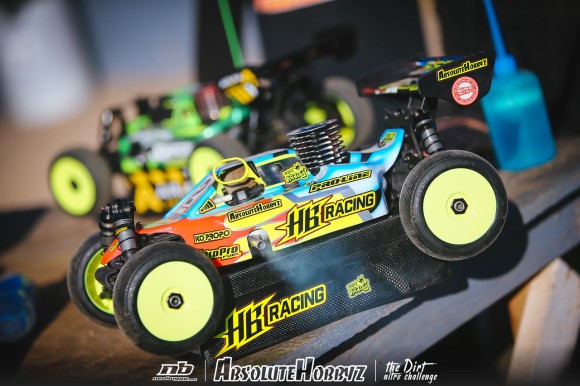 I wonder how good Cody would be if he actually gave a shit about racing RC Cars. I really do. I remember watching him drive some years back, before he was WC, and I remember thinking that this guy is damn good. Just the precision he placed his car, and the accuracy of his throttle and brake input, it was impressive. He still has the talent, as was shown in the B main where he put in a 39 second lap in order to secure the last bump up spot. What he is lacking is dedication, he doesn’t put in the work, and it shows. He will make the main, but he won’t be fighting for wins unless he starts caring. Paul can’t make up for everything with his dedication. 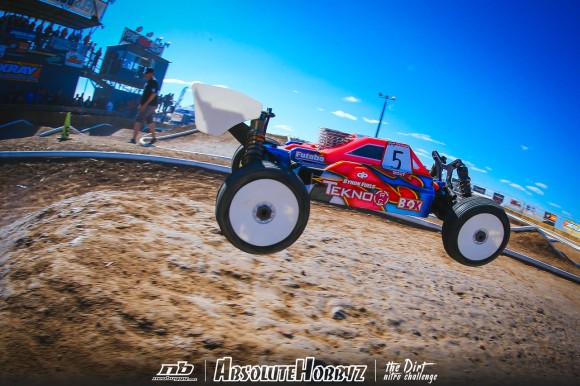 Ryan spent the race towards the back of the pack after a few bad laps early on. Relatively consistent, but not fast enough to catch up, and with a few more mistakes thrown in, 9th is all he could manage.

I have said it before, and I’ll say it again. Yes it’s fast, it seems to jump and land very well, but it’s just too hard to drive fast for a main, specially on a difficult track like this one. Lutz drove conservatively within his ability, and Bornhorst and Zanchettin crashed their brains out for 45 minutes. Before you hate me, just consider this fact, Lutz was challenging for the win in Truck, and Joe finished 2nd. In buggy they were both non factors. Are you saying they suddenly forgot how to drive? Exactly, now accept it and move on.