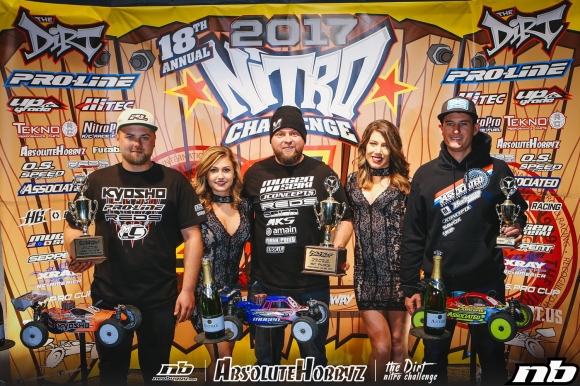 Lets take a look at the podium shall we.

What I said would happen in my silly season post, actually happened. Maifield was unstoppable. However, it did look really sketchy in the beginning, he made a lot of mistakes, and some really bad ones too. It could have all ended in the first 10 minutes, but it didn’t. Once he got some space, and found his groove, I had no doubt that he would wrap it up, as he began posting fast laps and catching the leaders. I happened to be standing next to his dad who was nervously watching, and I told him he could relax, his son had it in the bag. He looked at me like “who is this idiot”. He must not read my blog, I know this stuff.

Anyway, not a surprise, the Mugen fits Maifield perfectly in my opinion, he can drive it hard. I expect many more wins in the future. Ryan wasn’t really the fastest driver in the main, but he was in my opinion pacing himself, and playing it safe, which is rather unusual for him. It looked like he was driving a calculated race once he got out front, whereas for example Boots who was chasing, was just going flat out. If the roles had been reversed, I feel like Maifield could have turned it up a notch. Impressive performance all round.

Over the last few years, I have often heard the claim that the Mugen doesn’t suit US style tracks and that it’s just not fast enough. It’s a Euro car. I would like to thank Ryan Maifield for shutting those people up. Mugen just haven’t had good enough drivers, capable of winning these races. On this track the Mugen cars looked very good, really safe and easy looking. I think the fact that Adam Drake had his best result in a while also proves that.

Elliot was impressive at this race, and once again proved that regardless of what the track is like, and how hard it is, it is in fact possible to drive around it completely punched out of your mind. The most impressive thing about the man with the best ventilated armpits in the industry was however, that he did this with a bloody stick radio. Maybe if he had a wheel radio he would have won. Who knows.

He made too many mistakes in the main, but was constantly up there, even leading for a brief moment. If he can just keep the speed, and eliminate some mistakes, like he does back home in Europe, he could win in America too, and prove us (me and Degani) wrong about our  SRT, (Stick Radio Theory).

Pretty standard, track had everything, the Kyosho handled everything. If there is one thing I would say, it would be that possibly the reason for Boots out performing Tebo, could be that the Kyosho needs to be driven hard, specially on a track like this one, if you want to be fast. Pushing a car to go fast has Boots written all over it, unlike Tebo. That’s why Tebo is so good at Neo, there you have to be more conservative and precise. So I think the way to go fast with a very stable and planted Kyosho on a fast track like the DNC track is Boots’ forte, while Tebo is consistent and smooth, but just a bit slower.

I had actually predicted a podium of Maifield, Ronnefalk, Cavalieri before the main, so if we substitute Ronnefalk with Europe, I got it! Anyway, you can’t have a DNC and not put Cavalieri on the podium these days. I didn’t think he quite had the pace to win, so I figured he would just squeak it in. Too many mistakes cost him. He even lead for a while, and was looking like he might check out, but then he crashed in the front triples I believe. Just silly mistakes cost him this time, but still, he was on the podium.

It looked good to me, I honestly don’t know what it is lacking, if anything, compared to its brother, the Mugen. Nothing stood out. I don’t know what to say really. The boys probably just need to work some more on setup.

I’ll write about the rest of the field later, if I feel like it. And of course about my B main too.