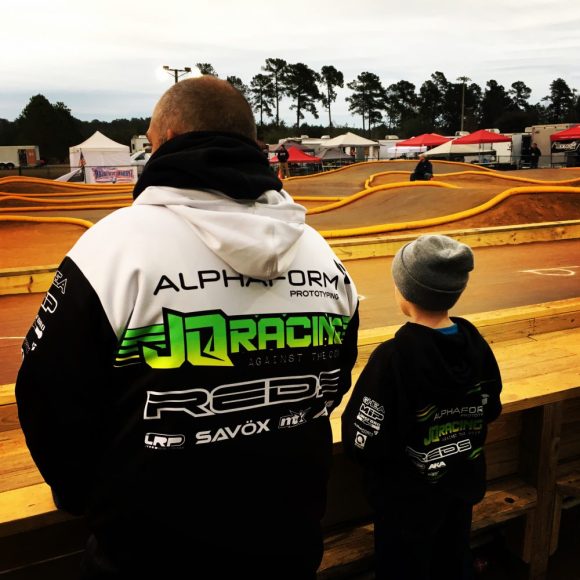 Today was all about mains. Frank, my protege of the week end had qualified in the lowest main. OH MAN! How did this happen. Well partly because this is his first big race. So after a quick pep talk, it was all business. A sip of moonshine for warmth, fist pump, you can do this. The main starts and it doesn’t look good. Then something clicked and Frank laid down some incredible sections and lines, landed jumps perfect, WHAT THE….. Ken Tackett and me couldn’t believe it. What was going on. Frank reeled in the leader and finished a close 2nd, bumping to the next main. That’s how you do it. One friend down, one to go, Jordan Hardwick, how do you like THEM apples? 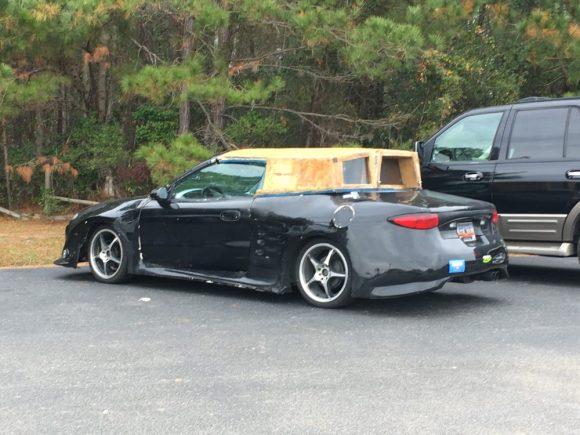 Is this “Redneck Fabrications”? This was dialed.

Next race, things were getting tense, this was going to be a really tough one. Franks other racing buddy Lukas was in this one, all American flagged out, racing his superdialed Losi. Sorry, TLR. I think Frank had higher goals, he was going for the win, me, I just wanted Frank to beat his friends. The race was on, it was crazy as only the lower mains could be. You know how you watch a car and it’s all going well, then it’s as if a grenade goes off under it and it exits stage right, taking out someone in the process. Never ending entertainment. I had tried to speak to Frank about staying calm, keeping his cool, but he had moments of overly ambitious moves that ended in some spectacular Cirque du Soleil shit. Ryan Lutz was out there marshalling, I don’t know why, the guy is nuts if you ask me. After all the carnage, it came down to the last lap, CAN YOU BELIEVE IT? Last lap, the American flag TLR was straight ahead, Frank had re-found his groove. He wasn’t going to let Lukas Whatshisname beat him. And 3 corners from the finish Lukas caught a pipe, Frank was through, and he MADE IT! He beat his racing friends, my job was done. Awesome. It was maybe 7:30am, and we headed back home, for some more sleep.

Quote of the event:

JQ, have you ever thought about making a Truggy?

-Yes, for about 3 seconds…(Walks away)

Here’s a short report from Frank:

Running the Gauntlet with JQ…. WHAT A WEEKEND!!! I feel that as a relatively newcomer to this sport, and thinking that I know a decent amount about how to drive and race, I was sorely mistaken. JQ is not only down to earth, but a genuine human being and was kind enough to share his wisdom of what makes a driver not just a hobbyist. He has a great vehicle, and the knowledge of how to use it equivalent to what a world champion F1 driver would possess. Over the weekend I felt as though I ran an RC Gauntlet, and it surely paid. He is a plethora of knowledge, skills and more importantly, humanity. Not knowing me before this weekend, he has started the process of turning me into a competitive driver, and for that I am eternally greatful. Anyone out there looking into getting into RC, JQ offers top notch products and if you ever read his blogs, drops tons of knowledge. The Fall Brawl was my first big race ever, and he showed me that I CAN drive like I want to with a little dedication and focus. 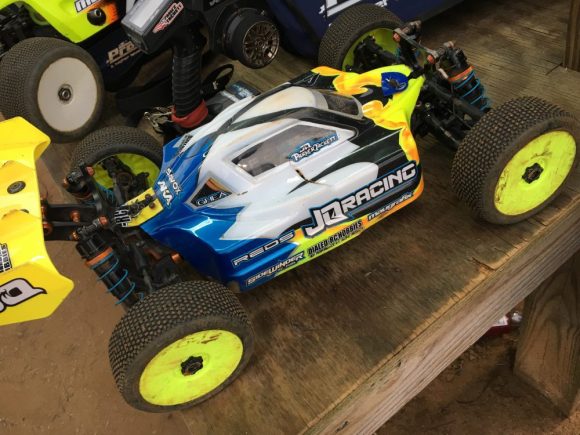 Parker Tackett and Todd Tucker were also racing their JQ’s, with both of them bumping at least once, Todd looking very good in his electric main, winning after a solid performance. Parker bumped into the Jr main so he got to race the big A! Great job Parker, and you are clearly a superior driver to your dad. He needs to consider becoming full time mechanic. :-p. TJ Pollard was also about to run his eCar main when his speedo decided to go on vacation some place warmer. Damn eCars! Better luck next time dude! I know a guy doing good deals on nitro cars! 🙂 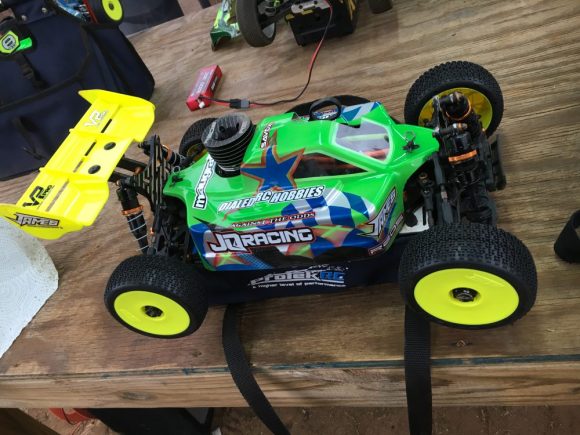 Todd Tucker before his nitro main. Got that REDS motor purring warming up

As for me, this being the first time here, I now know better what to expect. I need to figure out the tyre saucing situation, I didn’t use any and do believe it hurt me, and I need to bring different tyres and compounds. Looks like you need super soft and clay, and small pins, indoor tyres basically. This was an indoor track outdoors lol. Regardless of that, I did make the main, I finished 8th, and had no problems during the whole event. Cole Ogden was leading and looking good but his tyres came unglued. Ryan Lutz ended up winning. In truggy Cole Ogden won, and in eCar JR Mitch won, so 3 classes, 3 different brands and drivers won. That’s quite unusual I think!

Big thank you to everyone here for putting on the race, and to Frank and friends for all the great hospitality. I had a lot of fun, even though the result was not what I wanted.