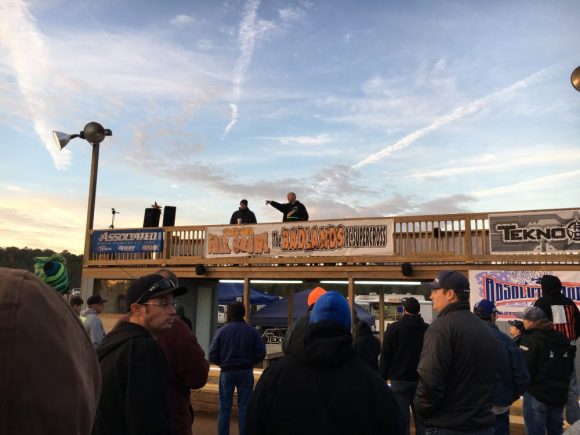 Ok qualifying done, well not exactly, I am done, some others are not. Been a bit of a long day, will be a 16h day or so! Bit of a joke if you ask me, but these Americans are hard core! Love their racing!

Anyway, I’m only running 1 class. Not the best move, I have to say. 8h break between runs, not exactly ideal I tell you. 1st run my car was a bit off, too soft, I didn’t expect the traction to be so high. 2nd round my car was good, but it was a bit loose, so for tomorrow I have no idea what tyres to run for the main. I think I am in the main, there were no results posted anywhere, and the liverc list is counting 2/2. But I should have just squeaked it in. Cole Ogden TQed in front of Lutz.

The track is really fun, and really fast, just over 20 second lap times, a different kind of 1:8th racing, that’s for sure. I think I’ll start hitting my lines in the main 😀

My rental ride is being driven by Frank Schwelik. I was supposed to be hanging out with Charlie(‘s Angels) Lineberger, but unfortunately the guy has a bit of an issue with his leg and is in hospital. I told him to just cut it off and come and race, but he said his dremel is low on battery. He was just going to leave but apparently the doctors were having none of that. Get well soon Charlie! So this meant that I didn’t have a ride, luckily Frank lives right by the track and close to the airport, so he picked me up and took me to the hotel.

This is Frank’s first big nitro race, so I have been his driving coach here. There’s no sugar coating, that’s for sure, better get used to direct feedback. Luckily Frank isn’t one of those emotional types, he takes it all in, and has been improving every run. Last run of the day he started off with two really nice laps so I had to check if he handed his radio to someone else, nope, it was Frank at the wheel, things were looking good. Then I guess he must have began feeling confident and he flew off the track a few times. I need to have another pep talk here before the mains. We’ll be good. Got to beat his racing buddies, that’s the goal. He out qualified them, that’s good, now we need to smash them in the main. No pressure Frank, just imagine you are driving a real car and think happy thoughts! 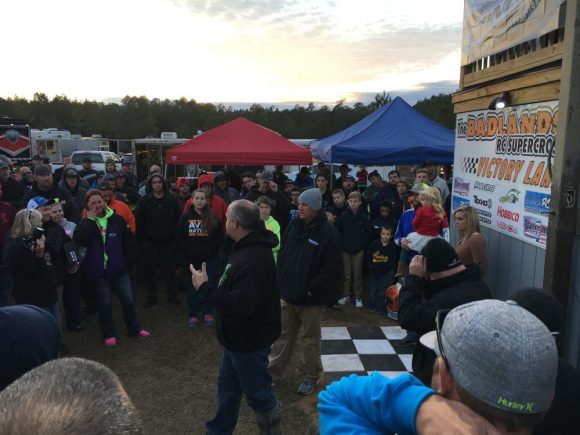 A bit of life happened.

At one point during the day we had a break mid round, and I expected it to be some pointless nonsense, but went to check it out anyway, as all drivers were called to the podium area. Turns out it wasn’t. Apparently a local racer’s daughter, probably about 4 years old, had been involved in a terrible accident that resulted in her losing her right arm at the elbow, so the race organisers and racers had organised raffles and auctions and what not, and had raised money for them, and with the 1000usd or so raised at this race, if I understand correctly, the family was given just over 5000usd to help with the emotionally and financially tough ordeal. Just goes to show that there are good people everywhere who are willing to help when people need it. Hit me right in the feels when the mother cried and and said thank you. Hats off to everyone that made that happen.

With all the downtime, and running late after dark, I have got to experience a rather in depth South Carolina in a day crash course. From deep fried everything,( I mean Oreos, really?) to moonshine, campfire and S’mores. Pictures below.

I told you these guys are serious about their racing!

It was a bit chilly, but the crew here had some heaters.

A trailer is what you really need at these races!

Got some real southern food. I tell you, the rice and bbq pulled pork I had today, BEST FOOD I HAVE HAD IN AMERICA. I kid you not. 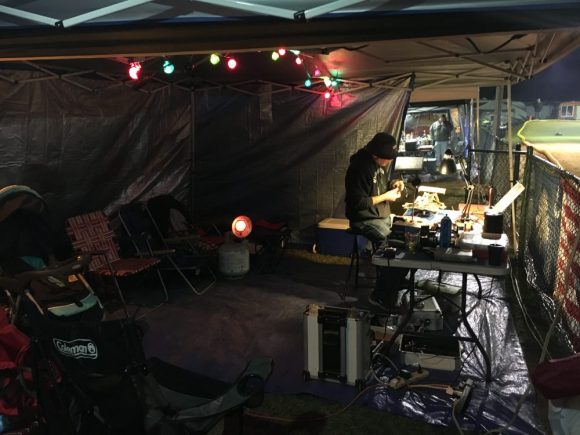 We got “Chef” working the grill, mmm mmm!

And this, which I have only ever seen in movies, some marshmallows over a fire.

Which lead to this, a S’more, which I had never heard of. It’s a hot marshmallow that’s squashed between a cracker along with some chocolate, and it creates a sticky sugary mess that will definitely kill you. But it was good!