Feelings Are About to Get Hurt at Thunder Alley

Tomorrow, the first of the last few showdowns of the season, JQ vs. Kyosho C-Team Jeremy Kortz. Team culinary expert Greg Degani was too lazy to attend, as he is most likely sneaking in the odd donut after the tough ordeal that was the worlds.

As you know, if you have followed this blog, one of my former RC heroes, turned rival, Jeremy Kortz switched to Kyosho after a 1 year stint running the JQ car. He thought he would be faster, but with the help of World Champion Greg Degani, we took him down. Kortz is now at an insurmountable deficit of about 8 losses. There’s just not enough races for him to catch us this year. Sorry Beeesh!

So now this is just for shits and giggles, but it’s on. Tomorrow at Thunder Alley I predict the shit will hit the fan, and some feelings will be hurt. Time will tell what level of the “n-word” will be reached, but a good dose of it is almost guaranteed. Unfortunately the layout does not feature any bowl turns or burms, but there are a couple of tricky inside lines you can pull on an unsuspecting rival. 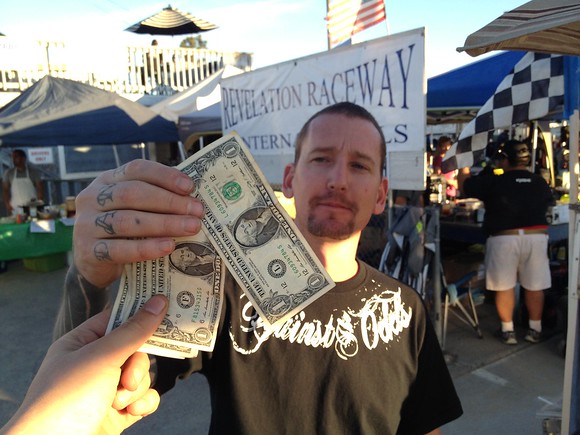 This is what we like to see. Kortz losing bets, handing over money.