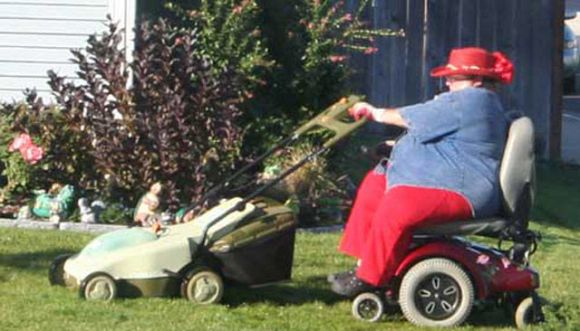 If there is one thing Americans are good at, it’s being lazy. Name pretty much anything, and in America there will be a drive through version of it, just so they don’t have to move their fat arses out of their SUVs. I mean even the language is simplified, did you notice that just now? Thru/through. But there is another side to this, and it’s called convenience. Let the lazy bastards be lazy, for the productive people out there, America is awesome, because the lazy drive “thru” culture has brought with it convenience, and when things are convenient, it’s a lot easier to be productive, and get shit done! I mean you have to go to the pharmacy to get some pills (using the drive “thru” of course), you can get your beers there too. Who thought of this? So convenient, I love it.

This is my pet peeve in this country. People who are perfectly capable of walking use these motorised shopping carts and wreak havoc on everyone. If you can’t walk enough to go get your groceries and hemorrhoid creme, then you don’t deserve any. I think anyone who uses one of these should be rounded up and shipped off to Syria. The rest of the world manages America!

But to get to my point, it is this. The single greatest achievement of the Americans, is deciding to allow turning right during a red light. I bet you it started because some lazy bastard was so lazy, that he couldn’t be bothered to sit at a red light when he could easily just turn right, get home sooner, and eat more nachos in front of the TV.

The funny thing about American traffic signs is also how they write everything. In Europe there is a symbol for no parking, in America they spell it out “No parking here any time”, “stop wait here”, “speed limit”, “Do not pass”. Basically, if you don’t speak English, you are fucked! Then there is this one, “No turn on red”. That’s the bad one. Then you have to sit there in the right lane and look all European.

So why don’t we allow right turns on red in Europe? Probably because we have pedestrians, people actually walk places in Europe, and if we had cars running red lights things might get dicey.