Today the race that actually matters began. We are running six 10 minute qualifying runs, 2 each day for 3 days. In the first run of the day I wasn’t sure what tyres to run so I ran SS grid irons. I don’t know if it was the wrong choice or if I was just slow, but I didn’t crash, and only finished 48th. I was relatively suicidal at this point in time. All that practice, all that preparation, all that planning and thinking about setup, and I have a clean run and end up 48th. What a disaster. I was so far off the pace I wanted to pack up and go back to the hotel.

I made a couple of small changes for the 2nd round, softer rear swaybar, and different springs, as well as running soft gridirons. Both changes to the car are minor, and I knew my driving would have to be the biggest change. I’m in race 6 so I am able to watch all the fast guys, so I went out and watched all 3 heats from different areas of the track, and focused on the most aggressive drivers, to see what they were doing. I needed some inspiration for my run. I was pretty mad at myself going into the 2nd round, so I decided to just go for it and see what happens, and after watching the fast guys attack the track so aggressively I figured I have to try that too. Go as fast as I could and if I crash I crash. I still tried to stick to good lines, but I was a lot more aggressive. It was all going really well until I caught Jerome Sartel who just would not move. I was behind him for I think 2 laps, giving him a small nudge or two, but he wouldn’t let me by, so I jumped over him in the option section. At this point I was pretty pissed off as I lost my rhythm and time behind him, so a lap later I crashed, of course. Come to think of it I also crashed in pit lane. Then on the last lap I lost another second as I caught two other cars. Sounds bad right? Well it wasn’t, I went 2 seconds faster than my round 1 time and was 13th. It’s good to remind myself that I can do it if I get my head on straight and go for it. I hope I can manage to pull off at least one round like that tomorrow also, just without the mistakes and the traffic. It will definitely be hard to do, but I won’t be changing my approach of be fast and on the pace or crash out. I’m too slow to play it safe. This is the worlds after all. Better leave it all out there on the track.

I’ll give you one guess…

On another note, the talk of the pits seemed to be the picture Degani took of me, when he broke in the bathroom as I was taking a shower. He obviously sent it out to everyone. It’s actually a pretty good one, I tucked the twig and berries between my legs and got a pretty convincing mangina going. I had to think fast in order to avoid even worse embarrassment.

I’m too tired to think of +/- today. Maybe tomorrow. Loving the best Worlds track since 2006 Indonesia. Charlotte was pretty good too but weather spoiled that. 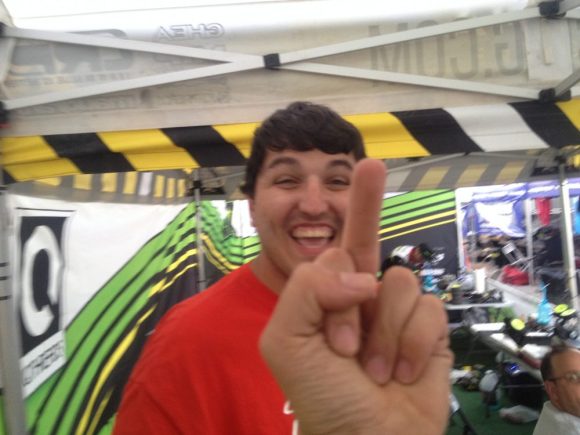 …that’s right! I’ll get you back fool!