Leave a comment
By jqproducts Race Reports, Thoughts on Work 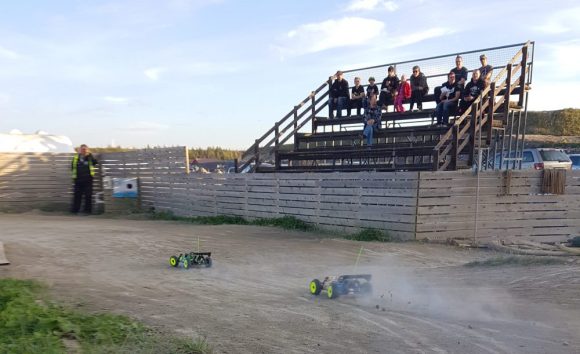 Today I had a new experience at a race, something I have been waiting for, for a long time. We had a race on my home track, where me and Max Mört have obviously practiced a lot, along with many of the other fast Finns. I TQed, and Max was 2nd, with Ari Heinonen 3rd. Things were looking good for the A main.

And then it happened. Max and I immediately pulled away, and for the next 10 minutes, including the 1st pitstop we raced within about 1 second of each other, with Max right behind me. Then I clipped the pipe exiting a corner knocking me offline, and Max dived to the inside in the next corner. I left enough room for him to go by, and then followed him. Apart from one failed overtaking maneuver where I rolled going too tight, I was right on Max’s rear bumper for the next 10 minutes, and then with 20 minutes down and me right behind Max, he made a mistake and I got by. During the last 10 minutes of the main I managed to pull away, as Max had another roll and issues with backmarkers, but for that first 20 minutes, it was amazing.

It was definitely Max’s best race ever, no mistakes or missed lines, and we were both going very fast. I have been practicing a lot and had a good feeling with the car, I knew we were fast. What was new, was the fact that I was not alone, me and another JQ driver pulled away from everyone and were battling for the win. It was a great feeling, and actually made me have to make an effort to focus on my driving instead of just smiling about how cool this was. The kid is getting fast, and the car is getting really good. Very proud of Max’s progress even visible during this year, and happy with how the new parts on the car are performing.

And to top a great day off, the first JQRacing Rental Ride was a success too. I gave my 2nd car to August Poutiainen to try, and he was satisfied, after getting up into 3rd place at one point. He eventually retired with a clutch problem, but clearly the car worked well. He even ended up winning the Finnish Open series so he is no slouch either.

Once the worlds is over, we will be offering my 2nd car out for 1 week at a time, to racers who want to give the JQ car a go, but don’t quite trust us enough to go for it. We want to give you a chance to give the car a try for free, because we know you will love it. More about that when the time comes!