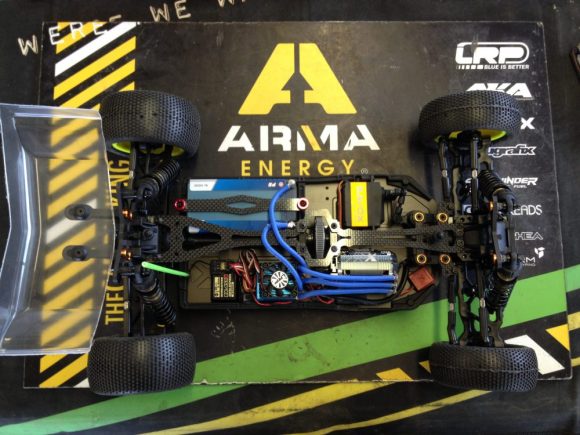 You can use 47 different combinations of batteries and locations, and motor locations. I chose this one. I like it. Max built his differently, so we will see which is better. He has the new conventional motor left rear, battery right rear. I don’t believe in that.

The Nr1 upgrade for 1:10th 4wd cars on dirt, a centre diff. So much better it stupid!

Not bad, I will post some build pictures, and all mods I have figured out need doing later this week. Next week we are going to the Euros, so this week is all about 1:10th scale.

The 4wd was a pleasant surprise. I tried J Smoker’s car at OCRC in January and it was really good, so I was pretty confident I would be able to get the 4wd car good. (and that’s truthfully the only thing I care about) BUT, I have to say I was surprised at how good it was already the first day. Out of the box it wasn’t really on point on a loose dirt track, so looks like I will be recommending some setup adjustments for the box setup for loose tracks :-). After a few changes it was pretty good, and then after installing the centre diff it was awesome. I’m happy with it already after just one day. It’s a shame we don’t have any high grip tracks to try it on. I wonder how the Euros track will be…