PNB Done – Racing in Mains, and the Future of big Races

Some of the JQ drivers at PNB. There were more then I expected, at least 12 of us, that’s not bad for a village idiot from Finland!

Well the 2016 Psycho Nitro Blast is over, and it’s time to look back at a couple of different things. the two things that stuck in my mind after this race. One is about racing, and the other is about the race experience itself.

Racing in a Main Event

This race, more than any other, possibly because there were so many cars in the main (18), really demonstrated well how important experience and patience is. It’s hard to concentrate for a long time and do consistent laps with no mistakes. I started in 13th, and before the race thought that I can finish 5th. And I was right. I didn’t, I finished 7th, but I could have been 5th. The reason I thought that was that I know how mains work. A couple of the top guys have issues, and the less experienced drivers start crashing, and that’s exactly what happened. Lutz flamed out, Cavalieri had a servo fail, and Tebo had a shock fall off or something like that. There were a number of drivers I had never heard of before in the main, and early on with them ahead of me, and me in 10th, I was patient and just waited for the mistakes to come, and they did. Keeping your concentration and not making mistakes requires experience and maturity as a driver. 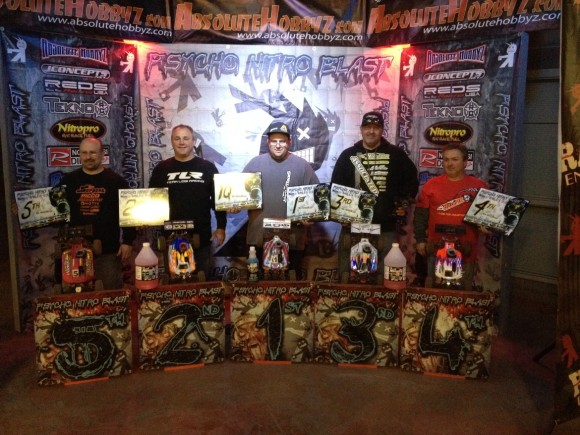 Greg Degani isn’t World Champion for nothing. He knows how to race mains. Even now, basically being retired he still has his moments. You can tell he knows how to drive. This year he has now done 4 races, improving at every one, and no, he doesn’t practice or club race.

It’s normal for drivers to have a lapse in concentration and crash a few times in just one lap, or two laps, and then be fine again. This normally happens about halfway through, or towards the end. It even happens to top drivers. It’s hard to avoid this. I had this happen to me about halfway. I heard mechanics start calling drivers in, I heard someone flame out, running out of fuel I assumed, and I started thinking why haven’t I been called in? Am I going to run out now. I didn’t trust my mechanic, and what happened? I crashed. A really stupid crash, and valuable time lost. You have got to trust your mechanic to do his job, and only focus on driving. It’s hard but you have to learn to do it. 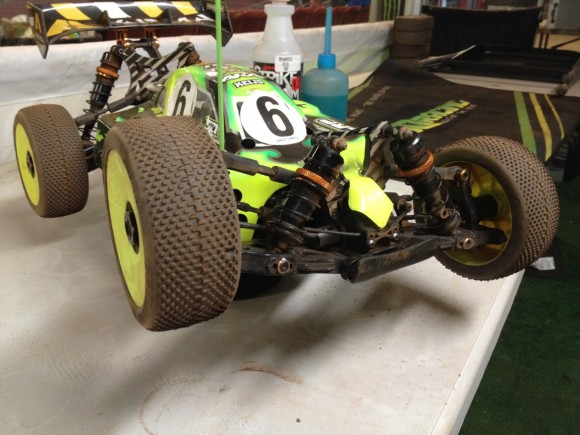 Early on in the eCar main, maybe the 4th lap or so, this happened. But I was still in 5th place until 1 minute to go, when I crashed and lost 2 positions. Not bad! Are front shocks overrated? lol

Another thing that you should take note of, is being aware of your surroundings, but only focusing and driving your car. Don’t worry about the car behind or the car ahead, focus on your car, and hitting your lines perfect, and maintaining your corner speed. Confidence is key here, believing in your own abilities, not worrying about someone catching you, or someone pulling away, just being confident and focusing on your car. The mental aspect of racing a main is a big deal, and it pays to think about what it is you are doing.

First of all I have to say, hats off to the organisers. I mean that was the most efficiently run race I have been to in America, the heats just kept rolling on, and very few and small delays. Impressive to get done with 830 entries and all that racing. BUT, and there is a big BUT. I think it is time to sit back and take some time to think WHO these races are for, the racers, or the organisers. I am not singling out PNB, they are not the only offender, Nitro Challenge etc, any race bragging about how many entries they have, all these races have a problem, and it’s value for money. As a racer, it’s just not there, you spend all that time and money, and you get 3 5-7min qualifiers, and if you are in a lower main, a main as short as 7 minutes!!! So you might get as little as 22 minutes of actual racing time. With an entry of 80usd, that makes it about 2.50usd a lap. Better not crash! Add to this a couple of other things.

No warm up time in order to save time, due to all the entries. no big deal, except how is a beginner supposed to adjust to the track, and make sure the engine is running right at a race like this? Impossible.

Wrenching after everyone else is done. The sign of a champion?

40+ class, legends class, lets invent another class. These classes are simply a way for the organiser to make more money. They serve no purpose. If you are going to do that, at least make it A JUNIOR CLASS. This should be all about the kids, not the old farts. Let the kids battle it out, give them more exposure, and give them the recognition, they are the future of the hobby. I am sure the kids would appreciate all the pro’s watching them more than the old guys do.

That’s it for now. Wednesday I am heading over to Shake and Bake Racetrack for their Wednesday race. I have a spare car, if someone wants to race it, let me know on facebook!

Crossing state lines on the daily…

4 thoughts on “PNB Done – Racing in Mains, and the Future of big Races”